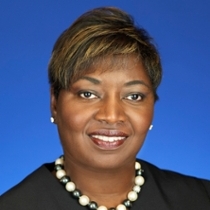 Judge Marcia G. Cooke is a native of Detroit, Michigan, received her law degree from the Wayne State University Law School in Detroit, Michigan, and is a graduate of the Georgetown University Edmund G. Walsh School of Foreign Service. She has practiced with a private law firm, served as a legal services attorney, a public defender, Assistant United States Attorney, and as a United States Magistrate Judge for the Eastern District of Michigan.

After relocating to Florida she served as an Executive Assistant United States Attorney for the Southern District of Florida, and as Chief Inspector General for the State of Florida. At the time of her nomination to the Federal Bench, she was an Assistant Miami-Dade County Attorney. Judge Cooke is an adjunct professor at the University of Miami School of Law teaching litigation skills and criminal law, has served as an adjunct professor at Wayne State University Law School, and is a long-time faculty member of the National Institute of Trial Advocacy (NITA). She teaches trial practice and techniques at law schools around the country, including Harvard University School of Law and Benjamin Cardozo School of Law. Judge Cooke is presently a member of the Georgetown University Board of Governors and has served on the University's Board of Directors and as the national President of the Georgetown University Alumni Association.